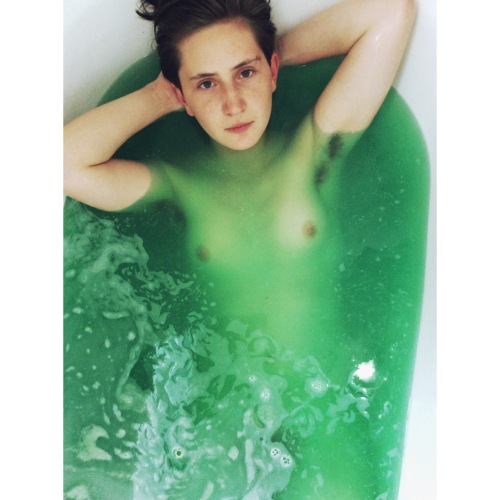 Ohhh! I actually recently got called out for this. I don’t really shower that much, although I did shower yesterday ’cause I knew you were coming but I would say I shower way less than the average person. And I mentioned that recently and both of my roommates were like “yeah actually I don’t think I’ve ever heard you in the shower or seen you come out of the shower” or “I don’t think I’ve ever been in the house while you were in the shower”. I feel like it’s one of my biggest secrets, like I’m probably less hygienic than is appropriate. I feel like I know how to pull it off though, I wear a lot of deodorant and as soon as I can smell that it’s bad, I’ll shower. I don’t think I’m a stinky person like, I naturally smell ‘ight and I make sure that I’m on it cuz I don’t like smelling gross. But um, I would definitely say I don’t shower all that much. I almost never takes baths anymore, but I like them a lot.

I’ve been thinking about this, sort of recently, and I feel like it’s my instinct to think of one that’s really mobile. I think when people think about being creatures that don’t walk on land, that’s what is inviting. Having this whole new movement, but recently I’ve been thinking about barnacles. That might just be where I’m at this week though, all I want to do is stay really still. Have you ever seen how a barnacle eats? It’s amazing. There’s this weird little feather tongue that comes out and brings things to them in this really beautiful way. I don’t know if that will be my answer all the time, but today I’m really feeling a barnacle.

Do you see yourself staying in Chicago for a long period of time?

Not continuously. I think right now, I’ve started feeling like Chicago is the place that I love and the place that I come back to. But, I definitely want to live other places, like right now I’m thinking about moving to Mexico in January. I don’t know if I can be in Chicago for a long time right now. I see myself leaving and coming back.

This is such a fun question right now. I’ve been thinking and have really thought through what matters. But, I think that I’m really passionate about moments and interactions that make life sort of feel like something more than just routine. And that can happen in a lot of different ways and I’ve found that in a lot of different places. Such as at different points in my life. Personally, I used to really locate that in theater. I used to do a lot of acting and a lot of performing though recently that hasn’t been such a big part of my life. It’s sort of felt like a place where those feelings aren’t super accessible, you know. In writing and in reading, different connections that can be found in yourself, you know? But the constant has always been through relationships with people. Yeah, how can I have relationships that like, create and provide moments that feel… something more. I don’t totally have words for that, but for me it’s because I get really stressed about not being present or like, not feeling things as strongly as I want to be. It’s the moments where I can feel the most, that’s what I’m passionate about. I’m also really passionate about food. Which I feel like people who know me wouldn’t necessarily say. It’s not like I’m this incredible cook, but I’ve always felt like if there’s one thing that I love to do, it’s eating. And making food for people, even if it’s not incredible it’s sort of… important or valuable. That’s a big thing in my family, making food for people, it’s a giving experience. Food and the spaces that sharing food can create. I feel like that’s maybe been the only constant in my life is food and for me, making coffee but that’s sort of an extension of that. I’m not really an incredible cook, I’m an okay cook, so when anyone comes to my house I immediately ask them if I can make them coffee. How they like their coffee, or some sort of thing like that, it’s my way of giving and wanting that person to be comfortable in this space. Part of that is for me, I need coffee. So having coffee makes me feel better ::laughs::.

I think that something that I’ve always sort of been afraid of, the word that I attach to the greatest fear, is failure. But that can mean a lot of different things, and that has had a lot of different meanings over time for me. I think that like, what it is, is this overwhelming fear of not being the person that I want to be. And not having a life that I want to have. Which doesn’t necessarily mean being comfortable all the time at all. It’s this sort of fear of not having my life make me happy overall, not moment to moment happiness, but not having my life feel valuable. Having this be kind of wasted time. Yeah, fear of being this failure to not having time be valuable or meaningful.