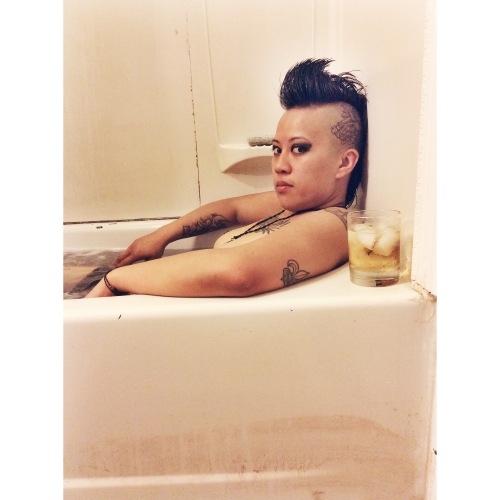 A seahorse. Because the guys carry the babies ::laughs::.

Do you have feelings about having children?

I don’t know, even when I was dating guys I didn’t think I would carry the kid. Hence, the seahorse. It’s never to late to change your mind. I’m giving myself at least five more years, I would love to have kids. But I have a lot of nieces and nephews and… I dunno. Maybe.

Definitely art. Definitely drawing, I appreciate all facets of art and I appreciate people that do it. Cuz it’s a lot of insight into their minds. Whenever I do a drawing and people see it at art shows they’ll ask, you know, what I was thinking when I drew it. And I wasn’t really thinking I just do it and then think of another idea and it becomes layers and layers of ideas. And just… I can get lost in it, there’s rarely ONE idea behind my stuff. I feel, whenever I see other peoples art, there’s… they started out with a basic idea and then it was organic and kept on changing and so I think it’s open. I never like to think to much about other people want it to be unless they have a really grand idea or concept. I think just doing it is enough. Getting it out there. And my family. I got a lot of nephews and nieces and they mean a lot to me. I don’t see them that often which sucks ’cause if it’s been awhile they’re that much taller and smarter and more vocal than before. I just want more time with my family. I’ve been in the delivery room for three out of five of them. The only reason I wasn’t there for the other two was because of work which really bummed me out. You can see a little bit of me in them… ’cause they’re so weird. They’re just… really amazing kids. Real fucking cute too.

When did you start creating work?

I had my first art show about three years ago. But I’ve been doing art, more so, ever since college. I used to draw in high school and got voted Most Artistic, which is so stupid or whatever, but I was excited by it. Kids used to pay me to draw stuff for them. Almost became a tattoo artist because of it, but I didn’t like the idea of people coming in wanting a Playboy Bunny and HAVING to do it. I like to have my own ideas and doing those. I think it’s hard to be a professional artist. Everybody wants something they can’t put down or draw on paper. And it’s our job to try and do it without having their input. I’d rather just do what I want to do without anyone else, I’m such an asshole. I don’t like being told what to do. They sign checks though… They hire you… gotta do their shit.

Is being in control of your life important?

Yes. Otherwise I would just feel lost and kinda crazy up in my head. I’m very… what did my girlfriend call me… she said I’m the most cautious free spirit that she’s ever met and my response is, “How does that make any sense!?” I’m very cautious. Very organized. She thinks I’m free spirited because I’ll change my appearance, but that’s not really hard. And I’m cautious in the sense that I’m very calculating in my next step. And for that, I don’t know. It’s like being an artist and very aware of the moves you’re making. It doesn’t make any sense to me. My friends who are artists who want to go big and go places always think about their next step. And it’s very hard to do that because I don’t know what I want my next step to be. Which makes me crazy. Like I want to move somewhere, but I don’t know where. I want to do this, but I don’t know how. I just make myself crazy.

I don’t think I’ve achieved that yet. I’m still waiting for that big lightning bolt to strike me, and I think it will, one day. Just got some work to do.