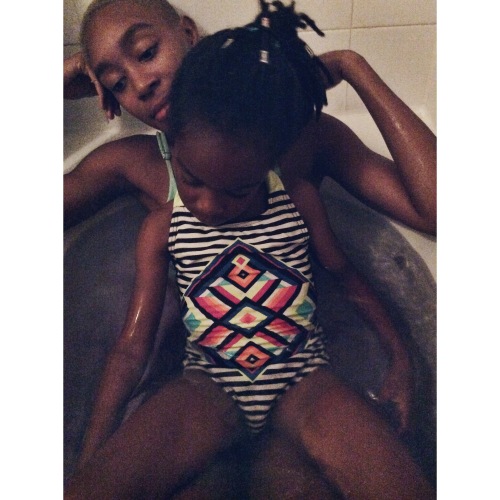 K: Ummm, maybe about four days out of the week. I like to bathe a lot, but I don’t get to.

If you were and underwater creature which one would you be?

K: Seahorse. They’re pretty.
S: Seahorse.
K: I don’t even know why I said that, but I guess it’s because I’ve always thought they were interesting. They don’t have any arms or anything, they just kind of float. With their tail. It’s the first thing that came to my mind, other than that a turtle or octopus. Or something bioluminescent that has a light on it.

K: Oh hell yeah. Yeah, I like to plan things, I’m not great at it but I do like to be aware of my future. Of where I’m headed.

What is something that you feel accomplished with?

K: Raising that little one. ::laughs:: I feel pretty accomplished with that. I’m finally in my own space. Though I don’t own it, I’m at least supporting myself and my family. I’m accepting more responsibilities with self-assurance and accepting what I’m responsible for. I think I’m doing a good job. Don’t really know what I’m doing.

Do you think she knows what she’s doing?

Do you have family traditions passed on?

S: Yes.
K: Like what?
S: When we go on walks together! When we ride bikes together! When the whole family goes on a field trip.
K: Yeah, I mean spending time together.We’ve had a family function every year for about 28 years now, I was the host for last year. We call it ‘the family love exchange’. Umm, carrying on traditions. Being in tune with my inner being. Carrying on that awareness to her. Being confident in my divine nature as a melanated woman. My mother was a cosmic woman who was aware of her powers, she studied a mix of different religions and passed on her knowledge. So yeah, I think passing down some spiritual knowledge and a connection to my native heritage and culture is important.

Do you believe in God?

K: I’m afraid sometimes that I will get caught up in other people’s stresses.
S: I’m not scared of nothing.