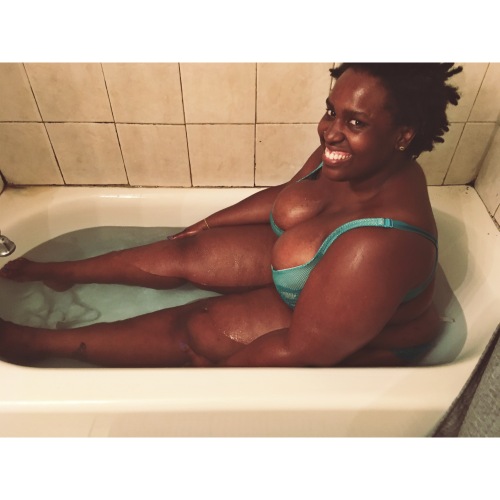 I try to do it like, twice a day. That’s showering, baths, I want to start doing that once a week and things of that nature with spiritual baths. So, alright, so I say that I’m a witch and I feel that baths are very healing and it’s very calm. And you know, sometimes showers just don’t do it for me. So I want to take spiritual baths once a week to unwind, get the stress out, relax as well as doing some witchy shit like setting intentions and doing spells. Yeah.

If you were an underwater creature which one would you be? Mythical or real.

Cool beans, cuz the first thing that popped in my head is a mermaid. I would be a mermaid! Yeah, I feel like the human form sometimes is not negative, but it’s whatever while still being cool. You can have the fishy aspect and the human aspect, I wouldn’t want to get totally rid of the human part.

I’m passionate about creating, I’m passionate about expressing myself as well as showing people dope shit. And dope events. And bringing dope people to dope people. I am kind of known as the person who knows everybody, that knows everything that’s going on. I have my friends telling me “GIRL! You should have told me about that event, what the hell!” Because I just like what people do and I just want to show that to the world and help people express that and help them express themselves. But right now I’m trying to learn to express myself cuz I’m dope too ::laughs::.

My biggest accomplishment is starting my own business. My biggest accomplishment is starting my own business because I’m the only one in my family that has done that. I think about where I was in 2015, I was broke as fuck, my father had just passed away, dealing with a lot of depression and anxiety and stuff like that. To now, when I started my business in July, to know that I’m the only person in my family to have done that. It just feels really really good, it feels really sweet ::laughs::. Especially because I’m the black sheep of my family and a lot of times, my mom asks “what are you doing?”. It just feels good to have something that I own.

What do you mean by black sheep?

I mean I’m the black sheep cuz I’m the one… So my sister was in the army. My other sister graduated college on time and she’s the youngest, she’s a year younger than I am, she has a job and a car and a house. And here I am trying to figure it all out in this very small room, in this house in DC. When you’re raised by Jamaican parents, having a secure and normal career is what they want for you. But I can’t physically, mentally, or emotionally get a “normal” job. Whenever I try, It always backfires. Like, God won’t let me. So to be outside of a having a car/house/job, that’s me being a black sheep. Yeah. And I’m still doing okay!

What is something that you still struggle with?

Accepting myself, and all of myself. Expressing myself and all of myself too, I tend to try to form myself in the way that I think people will like me to be. I felt that my past self was like a parasite. When it came to lovers, when it came to friends, I felt like I would try to stick on to them because I think they’re amazing and that I wasn’t amazing enough. I would try to form to be like, the sassy side chick or the bomb ass lover and now I’m in a space where I have to be me. So I’m alone a lot of the time and I force myself to be alone to see myself and deal with myself alone so I can be like, “Mykalee, you are cool and you do have flaws but everybody has flaws”. And yeah. That’s how things are right now.

What do you think of relationships? Platonic, sexual and otherwise.

Oh my God. Ohhhhh okay ::laughs:: SO relationships! Oh my God, platonic ones. I’m actually learning to express myself and be out there more. A challenge I had in the beginning of summer was to see more people. Talk to more people and stuff, so I think that’s really good. But when it comes to romantic relationships I’m not the one. I’ve tried polyamory, I’ve tried monogamy, now it’s just plain old I don’t want to talk to nobody ::laughs::. At this moment in time, ya know, there are times because it’s people, times that it’s myself, it’s a way to protect myself. I haven’t successfully navigated romantic relationships at this moment. Gotta find my way, I know I’ll get there one day. And regardless of if I’m with many people or with one or by myself, I’m gonna be fine. Sexually, I love sex. I love sex, even though I’ve been celibate for a year to protect myself, and try to shed some energy that’s been old and needs to be moved, sex is good. Sex is alright by me. That’s it ::laughs::.

What are you afraid of for the world?

I’m afraid that people will just not… I feel like people already don’t accept each other. And if you say you’re something, I should just acknowledge it instead of being like, WELL this states or that states, you know, if I’m saying I’m a certain thing you need to respect that. Just do that! I don’t think it’s a hard thing to do. A lot of the time I do feel that, but there is such a division going on. And it doesn’t have to be that way.

What did you see today that was beautiful?

I saw a couple at my favorite cafe. They were just… So sweet together. I thought about my mom and my stepfather, it was just those candid tiny moments, those beautiful moments.