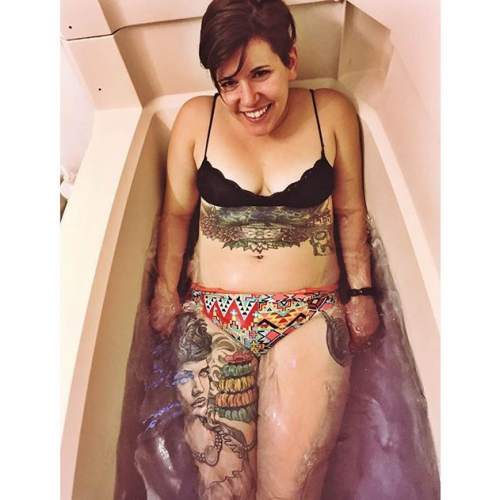 Every day. Bathing is not a thing though, usually. I don’t know why.

If you were an underwater creature, which one would you be?

A slermaid! A sloth-mermaid, of course. Because I love sloths, and I’m a mermaid. I was born to be a mermaid. So it’s a slermaid, there you go. Are you jealous? :laughter:: You might be, I can tell. Were you born near a body of water? Yes, I was born near a body of water. I was born in Israel, I used to walk by the beach all the time. And I used to sneak out of school to go to the beach. Which is a no no, children don’t do that. I guess I should be parental. Uhh, yeah. I like the beach. It’s relaxing, it’s cool, there’s a bunch of sea creatures. Once I lost my sunglasses when I was in South Carolina, and I still believe that an octopus is wearing them. So there’s that. I like octopus, octopi- octopi? Octopi. Octopusses. Meeses, mooses, ::laughter:: who know, the English language is weird.

How many languages do you know?

Two, just Hebrew and English. And then I know how to count to five in Arabic, no big deal.

Do you think thoughts in one language?

Both. Think in both, dream in both. But it’s funny because, when I dream in Hebrew and it’s somebody that would speak English, that’s when I know it’s a dream. So, I figured that one out.

Do you have certain memories or ties to the extent that when you think in one language you feel a certain emotion?

No. No, I was very bummed though when I was hanging out with NSync in a dream and they were speaking in Hebrew. So that my recent emotion. Still a dream to me NSync, no big deal. Just a normal dream every little girl has.

Baking! And cooking healthy food, which is is kind of funny, because they’re not really the same thing. I don’t eat processed sugar, so essentially I’m like a drug dealer. Sugar is a drug. I sell it, and I don’t eat my profits. So there’s that. Some people call me a drug dealer when I give them samples, because it’s addicting. I’m sure kids know that sugars very addicting. So yeah, my names May and I’m a drug dealer of sugar. No big deal, totally normal.

When did you find you passion for cooking and baking?

When I was vegan. So when I was like 20… 20, 19? So I was vegan, and Toledo is pretty sucky when it comes to vegan stuff, so I had to start learning how to cook things that my mom would make, but without dairy or meat or eggs. And then I fell in love with it, I don’t know, it was fun. And I still think it’s fun, and then I went to school for it And working in way too may restaurants to count, and then decided that I want to bake for the rest of my life. Because, people don’t bake well. People will just do cupcakes and cakes, and things that people are familiar with, which is unfortunate. And I understand why, but there is so much more than just cupcakes and cakes in the world. And unless you live in Europe or the Middle East, it seems that people are afraid of it. So I’m here to, you know, not be spooky and you know, shove French macrons in your mouth. ::laughter:: but, not in a sexual way, that would be really weird, I’m just a drug dealer. I will never force you to eat something… maybe. We’ll see. Unless like I make like, mock-liver and you’re like, “I hate mushrooms.” And I’m like, “No you don’t, you just never had mock-liver. And now I can prove you wrong, so” It tastes like chicken, like chicken pate, but it’s just mushrooms, walnuts, honey or you can use agave if you’re against honey, and salt and pepper, and caramelized onions, and it’s amazing. It’s my favorite dip. I just kind of eat it with a spoon, but whatever, we can call it a dip. But yeah, it’s very Jew-y. It’s true, Jews eat a lot of liver. It’s a thing, I don’t know.

What do you think of religion?

I don’t do it. I’m not going to heaven, I’m going straight to hell. So sorry, sorry mom. Uhh, I don’t know. When I was in the 2nd grade, because I lived in Israel, we had to take bible classes, or Torah classes I should call them. Annndd, I sat in my room, I was like 8 years old. I sat in my room and was like, “Is God real?” and was like this is giving me a headache I never want to think if this again, and so that was it. It’s been… it’s been real. ::laughter:: it’s been real for the last 20 years, so that’s my opinion of it. I’m totally fine with other people practicing. You do whatever makes you happy, but it doesn’t make me happy. Do you think heaven and hell exist? Meh… I don’t know. I don’t think about it, I think about today and that’s it. But if I was going somewhere, it definitely wouldn’t be the good place. Whoopsies! I mean whatever, unless like, making yourself happy is not a sin, so then I would be going to the good place. Because I try to make myself happy. So, depends on how you look at it. What makes you happy? Uhh… being successful. Doing what I like to do, selling it to people, and getting compliments about it. But like legitimate compliments, not like, “OH I’m just writing this because I feel bad.” That’s what makes me happy. And making the people around me happy. Not just with sugar, but you know with other things that are not sugar. I don’t know, that’s what makes me happy. Having a clean house makes me happy. Having a good meal makes me happy. Uhh, yeah, food makes me happy. Ok? That’s really the bottom line, food make me happy. My dog makes me happy. She’s cool, she’s not food, ‘cause you know, she’s a dog. My dog should never be food, maybe she’ll be a statue after she dies, at my house, that would be cool. But yeah, I can only hope. Only hope I’ll have the money ::whispers:: she’ll be beautiful. Oh that’d be glorious.

What do you think of relationships? Platonic, sexual, or otherwise.

I’m in a relationship, I’ve been in one for two years. Umm, they’re hard. They’re time-consuming, they’re emotional, kind of weird about feelings a lot. Uhh, they’re there. I mean people want to be happy with a partner, so that’s cool, that’s why we do it. But they’re hard, it’s another job. So there’s that, when you work 90 hours it’s even harder. And when both you and your partner works 90 hours, it gets even harder. So it’s a job, it’s a hard job. But you know, it’s rewarding, in the end. Build a home, have dogs, put up a fence, with your friend who’s helping you for free. But yeah, that’s what I feel about it. Family is the most important thing, as long as you like your family. If you don’t like your family, then your friends become your family and THEY’RE the most important thing. So family is always the most important thing, even if it’s not blood. That’s what I think about it. They complete you when you’re sad, they’re there when you’re happy. They’re there when you just want someone to hang out with you while you’re baking by yourself in a dark sub shop. Umm, they’re there when they’re sweating and they ask you to get face towels so they can stop sweating. But yeah, that’s what friends are. And it doesn’t matter if you don’t see them for 20 years, they’re still friends.

Uhh… failure. But I don’t know what failure is. I mean, I’ve failed at many things, but then they taught me, or I realized that what I thought that I wanted is not what I wanted. So I don’t know what failure is, but whatever it is is what scares me. Losing all my money, because I’ve lived with and without money, so I… I’m not saying money is the most important things, but… I don’t know, I’m more realistic about it. And that freaks me out, to think about running out of everything, everything I’ve saved up. So that’s my fear I suppose. Is working hard for something and then losing it. Whatever that it, whether it’s money, or ideas, or ::sigh:: I don’t know.

What is something that you feel you’ve accomplished?

Ooh! One of my moments of realizing that I’ve done something good in this community. Unless you think that sugar is bad. Is going to places, and introducing myself as May, and then people immediately saying, “The baker?” Or me being at weddings where I bake, and people are stuffing their faces with sweets and then people telling me, “Oh I usually get these at the sub shop!” That’s always fun. So yeah, I like that. That’s when I feel accomplished. And yelling at students that cut their fingers. I’m the teacher that yells, “Bearclaw!” all the time. I mean it’s their fingers! I’m just helping the next generation to not cut themselves.