Ooh, I’ve been showering every day recently, just because I wasn’t like, living anywhere for the past month. So being able to take a shower in a house that’s mine has been super exciting. Umm, and I don’t know I don’t bathe as often, but I probably will more now.

If you were an underwater sea creature, what would you be?

I’m thinking a manatee. ‘Cause they’re like these beautiful fat like mammals that people think are mermaids. Or a siren, because they lure men to shore with their songs and then kill them, so…

Umm, a whole lot of things… I think recently I’ve been trying to find a way to focus my passion because I care about all these different things and then overload myself and can’t really do anything effective. And I think what I’m really trying to focus on is holistic healthcare. People don’t have access to basic understandings of how their bodies work, and basic health knowledge.  Concerns get dismissed all the time, like when fat people go to doctors who ignore all of their health concerns and try and get them to lose weight instead, umm… and you know, women, queer people, people of color for various reasons have hard times getting their bodies taken care of.  And when you go to professionals, they ask you all these questions and give you no understanding of why they’re asking you them and I want to develop like a practice where people are learning about their bodies as they’re accessing health care that sees them as a complete individual not just a list of symptoms, like herbs, or whatever sort of medicines they want.

What ignited this passion?

Umm, when I lived in Olympia I volunteered at an Herbal Free Clinic there, and there were just so many plants in the Pacific Northwest and I had no idea that these things growing in the wood could heal me. And there was something that was really satisfying about like understanding what makes a plant work and how that plant can interact with my body in beneficial ways. So yeah, I don’t know, it was just really empowering to find that I could find things in the forest to heal myself and I wasn’t relying on going to like doctors that are fucking scary to be around.

Do you think herbal medicine correlates not just with healthcare in the sense of body but with mental health?

Oh, absolutely. I definitely first got into it more for using things like Passionflower or like Anemone for anxiety umm, and I think that like Western medicine is very reliant on the idea of a mind body split. Like you go to doctors and you go to psychologists and they work with diseases and disorders instead of an overall body system, like your symptoms exist in isolation from your environment, emotions, history.  And herbal medicine is something that’s been used in like really every society ever before industrialization, because that what people had access to.  Plants can grow and evolve with humans and with the bacteria that infect us, plants have these vast bodies of knowledge that I don’t think humans can even fully understand.  I read yesterday, in this book on Adaptogens by David Winston, that 25% of modern medicines are still derived from plants used in traditional medicine.  They take one specific phytochemical and then like try to boost the intensity of it, instead of seeing a plant as something that has a lot of different chemicals that all work together.  Modern medicine refuses to see human or plant bodies as complex systems that work together in ways science can’t account for.

What is something that you feel is a big accomplishment that you’ve achieved in your life?

Umm, to stray from plants… I think the biggest thing I’ve achieved is finishing hair school. ’Cause I dropped out of college and kind of felt like I was never going to be able – yeah ever going to be able to complete something.  I’m great at getting things started, but I’m not so good at follow through, so yeah 1500 hours of hair school has been a big deal.

Uhh ::laughter:: I guess um, kind of like where I’m going now. Because like for the past year I’ve had all of these really clear goals, like I wanted to finish cosmetology school, I wanted to move to Philadelphia, and I was doing this Dialectical Behavior Therapy (DBT) program that was pretty intense, and I wanted to finish that.  I did all these things so now I’m like, “Shit, I need new goals! I don’t know what I’m doing at all!” ::laughter:: so, yeah I guess just afraid of, of figuring out what to do next.

What are you afraid of for the world?

Capitalism… ::laughter:: Umm, industrialization, I’m afraid of the world, you know? Like I’m afraid of things that happen day to day and unnoticed and unchallenged. I’m afraid of prisons and mass incarceration, I’m afraid of how institutionalized violence isn’t something most people think about, or even recognize exists. Umm, I think it’s really scary how the world operates in this way where like, we basically still have slavery in the U.S., but like it’s so layered under all these different facades that it’s really insidious.  People, liberals, think we like in this like “post racial society,” but our economy is still built on the forced free labor of incarcerated black people, and destroying indigenous land.  So, yeah. I’m afraid of the world every minute capitalism continues.

What do you think of relationships? Platonic, sexual, or otherwise.

Uhh, they’re difficult.  Yeah I don’t know, for most of my life I found all my self worth through my partners, through people finding me sexually or romantically attractive, because as a person with a fat body I was taught that I’m like “lucky” if I can achieve those things, if I can achieve that desire.  More recently I’m like, “fuck that.” I’m like, not trying to just be a thing that only exists for other peoples acceptance, I was celibate and single for like six months last year and like… I think that was a really good space for me to like try to deepen my intimate connections with my platonic friends, with friends that I don’t sleep with.  I’m like trying to learn to value different types of relationships, as well as one with myself.

What is something that you wish you would have known when you were fifteen?

Ooh. Uh, that the assholes you go to high school with don’t fucking matter.  That I should have been pursuing my own interest instead of being so anxious and insecure about what other people thought of me. 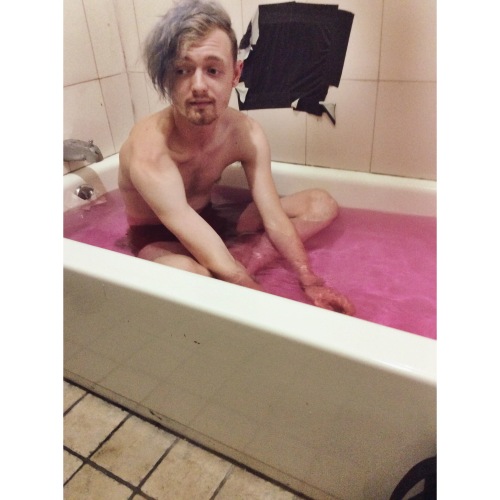 Soooo it’s fall right now, but in the winter it’s usually every two or three days, kind of as needed. In summer it’s once a day, sometimes two times a day if I sweat a lot. In the summer I sweat a lot and I hate feeling sweaty. I lift a lot of shit for work, I’m an audio engineer so it’s a lot of hanging speakers and stuff like that so I get sweaty and feel gross.

Lots of stuff. Music and theater primarily, that’s what takes up a lot of my time. I do sound for a lot of plays and read a lot of plays in Philly and that’s some of my favorite things to do. A lot of music and theater, I sing and play in a band called Collect Yourself and that also occupies a lot of my time, being a part of that. I got a drum set when I was six and that was my instrument for a long time, playing percussion in high school jazz band and marching band and stuff. But I got a guitar when I was 12 and I started playing a lot of guitar through that and I sold my drum kit when I was in high school, but I think guitar became my biggest thing so now I mainly play drums and guitar.

Do you think where or how you grew up had an impact on the way you view music?

Where I grew up definitely, family not so much. My dad showed me a lot of the bands that I cared about when I was younger. His favorite band in the world is Pink Floyd and I was floored by them when I was younger, completely blown away. He also listens to a lot of blues and my mom listens to a lot of pop country and radio pop, stuff like that, but when I was growing up she was really into the Talking Heads which was kind of a first touch on punk music maybe…? I don’t know if the Talking Heads are punk but anyway, I think that being where I was growing up was a huge aspect of it. Baltimore has a huge pop punk scene, or did, and I was close enough to DC to get all the Dischord Records bands stuff. I started listening to Black Eyes a lot again and they were one of my favorite bands in 9th and 10th grade, so it’s really interesting seeing how that record aged. It didn’t age so well, but I really like that band. But yeah, I got exposed to a lot of bands growing up near Baltimore.

I don’t know. Umm, I was really stoked that moving out of my mom’s house and moving here was successful. My sister just moved out of my mom’s house this year. She’s three years older than me and when I moved out her and my mom fought a lot. They adore each other, but they’re a mom and daughter that fight a lot. So I left and it was weird because I mediated shit a bit at home, so I left and wasn’t able to do that for them anymore but… everyone stayed and it having that was pretty successful. Also moving here to Philly and work with music and theater is really awesome. I wasn’t sure if it was going to work at all and having it work… I’m really happy to be where I’m at right now, it’s really nice.

Do you think that living in Philadelphia has impacted your accomplishments? Professional and otherwise?

Definitely. I couldn’t survive in or near Baltimore and do the work I do, there’s just not enough of a scene there. And in Philly, both in music and in theater scene, it’s one of the best on the east coast. In New York there’s obviously Broadway, but Broadway doesn’t have the types of shows I would be into a whole lot anyways, I do like a lot of American musicals but that’s not what I want to work in primarily. And Philly has a lot, there are 38 different theater companies here that all do dramatically different types of work. So there’s a lot of depth in the stuff I get to do here. If I would have stayed living with my parents, where I was in Maryland it’s an hour away from the city, I didn’t grow up in Baltimore, I just say Baltimore as a landmark, but Philly has everything to do with me being able to do this for a living